The game has a very natural build up. Players start by drawing less expensive and mostly political Level 1 cards. When completing their First goal they can also draw Level 2 cards that contains more expensive military actions On the board there are bases that give strength to
units that are the pieces you move on the board. The further you move a unit away from a base, the less strength it has. Units can engage in combat with opponents units or bases. Removing others bases and units give you victory points (VPs). You also gain VPs by funding project cards or by disarm nuclear bombs, in an effort to make world peace! You win by having the most victory points when the game ends (the round after a player has reached 15 points). Your resource income is also counted as VPs in the end, so it’s a good thing to build stronger bases and conquering new spaces that earns you resources. Resources are used to fund cards, build bases and buy new units. 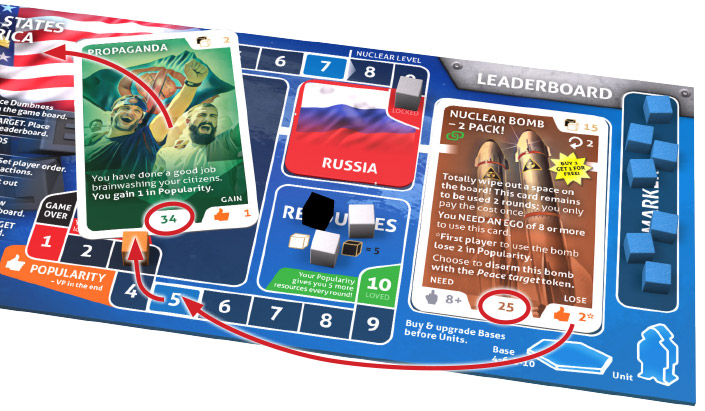 Numbers on the cards decides the order of the actions. This player is the first to fire the Nuclear bomb losing 2 popularity points. That makes the orange cube move into the card space removing the card before that actions is done. This player also has maximum ego locking the target.

On the Leaderboards there are tracks for your ego and popularity, these tracks can remove and block cards, so make sure you don’t get to unsure of yourself or get too unpopular. You need a high level of ego to be crazy enough to fire the nuclear bomb! Getting very crazy locks your target token. Getting very popular can earn you more income. Popularity is also counted as victory points in the end.
There is Dumbness cards that are shuffled into the card piles to make sure something stupid will occur. These cards contain weird actions for all players, like giving out the Nobel Peace Prize, or the result of somebody having cute kittens with them to work.
There are some interesting new mechanics in the game, but the main thing in this game is the fun factor! This game is designed for a lot of interaction between players and the often surprisingly actions from Dumbness cards add a great deal to the silliness. And the more players, the more fun!

The game developers doesn’t necessary share the same political views as this game express…
Or who are we kidding? Of course we do! 😉
119
WORLD DUMBINATION boardgameerdogangameKimjong-unmaduronorthkoreaputinrussiatabletopthewlaltrumpturkeyusavenezuelaworlddumbination

One week until this gang enter Kickstarter!